Just a note about tonight's schedule: If you're a fan of eye-catching, sometimes outlandish clothes, don't miss Joan Crawford in The Bride Wore Red.
Top

Two Trailers from You Tube(s)
https://www.youtube.com/watch?v=gQgmpEom3KI 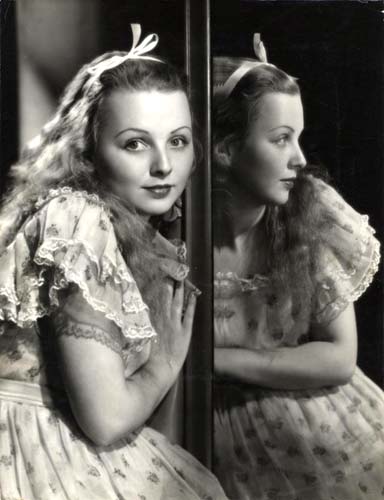 She was sensational ... I was stunned by how good it was and I was entertained by her. I was mesmerized by the special effects, the animation, the acting, it was so unreal that I was floored by it. No wonder my parents and grandparents loved it back then and they talked about it all the time when movies are being discussed around the family table.

All Star Cast from top to bottom ... every single character from Mad Hatter to Humpty Dumpty ... then the White Knight to White Queen was top notched. I am ordering a copy of this movie from TCM.

I watched it last night too... It was fun and although I didn't recognize everybody, I did manage to decypher W.C. Fields and Charles Ruggles by voice. One needed a scorecard to really be certain who-was-who!!!

I especially loved seeing Louise Fazenda as 'The White Queen', as she was a friend of mine way back when... I had never seen one of her movies, so I loved this... She and Edna May Oliver were a hoot!!!
Loved May Robson - "Off with their heads!!"....

Thanks for sharing this Larry ... I appreciate this.

The only actors I recognized in Alice in Wonderland other than Edna May Oliver were Tweedledum and Tweedledee--Roscoe Karns and Jack Oakie--and that was only because of their particular voices. I agree with Erik about Charlotte Henry's aptness for this part. I kept reminding myself that the already mature-looking Ida Lupino had been imported from Britain at the age of 14 especially to play Alice. When she stepped off the train in LA with her platinum blonde dye job, pencil thin eyebrows and soignée manners, the Paramount reps must have freaked out. Poor Ida, she hung in there and thank goodness, eventually went back to a more natural look--taking about fifteen years off her appearance too.

I found it odd that in the credits one of the men who invented production design, William Cameron Menzies, was listed as a co-screenwriter, but not as anything to do with the look of this unique film. Menzies' stamp was all over this movie, with examples of his characteristic way of toying with perspective, the adaptation of John Tenniel's original (often grotesque but compelling) illustrations, and the dreaminess of the landscapes. While watching Alice I kept being vaguely reminded of a quite obscure but interesting Menzies feature, The Maze (1953) that used 3-D. What an impact that 3-D could have had on Alice in Wonderland, especially when she stepped through the looking glass!
Avatar: Frank McHugh (1898-1981)

Seeing your comment, Moira, about the importation of Ida, I remembered my well-worn copy of John Springer's They Had Faces Then. Here's his take on the casting, from page 133:

"Let's all say a word of gratitude to Charlotte Henry. If Charlotte hadn't won out, Ida Lupino would have played Alice in Wonderland and that wouldn't have been right at all. We needed Ida for other things.

"Miss Henry was a passable Alice. But a girl can't do much when she is surrounded by W. C. Fields as Humpty Dumpty and Edna May Oliver as the Red Queen and half the hams in Hollywood in Tenniel-inspired masks--all with only a minute or two to establish their characters, and themselves. There had been a few roles before Alice for Miss Henry--she was billed as Charlotte V. Henry then. And there woulda be a few to follow--Bo-Peep in Babes in Toyland and a girl in The Last Gentleman. But you can't get much attention when you're playing with Laurel and Hardy or George Arliss. So she didn't linger long on the movie scene. Sorry about Charlotte--but we're glad it wasn't Ida."

The fates decided by "Alice..." aside ( can't help but wish more for Miss Henry and her dreams ), I'm so glad it was Charlotte in the part. I enjoy her, and believe her in it. And I wouldn't trade her, even for Ida. Or even for my beloved Anita Louise. ( Anita had been considered for the role of Alice, and was thrilled to be turned down as "too old." She said, "Always before when I had failed to get a role it was because I was too young. Now I felt that I had really grown up." )

The scenes I love best, though, are the drowsy opening scenes. It's snowing outside and there's nothing to do. So she holds her cat up to the mirror, and makes the chessmen talk, and sighs "Oh dear." Childhood boredom and inventiveness, and it feels just like I remember it feeling.

Do you think the movie might have gone over better with a garish-but-unmasked makeup?
Top

The Ingenue wrote:
The scenes I love best, though, are the drowsy opening scenes. It's snowing outside and there's nothing to do. So she holds her cat up to the mirror, and makes the chessmen talk, and sighs "Oh dear." Childhood boredom and inventiveness, and it feels just like I remember it feeling.

Me too! Those scenes are my favorites too. I just can't wait for my copy of the film ...
Top

Isn't it wonderful that it's finally out on DVD!

By the way, Erik: I love that avatar of Rita and Gene. What a pleasing sight!
Top

JackFavell wrote:Did anyone watch Mary Astor and Ricardo Cortez in I AM A THIEF? Oh my goodness, I LOVED this movie!

First of all, Ricardo Cortez and Mary Astor were just great together.. so flirty and sexy. And then there's the crisp and exhilarating direction by Robert Florey, who manages to make this little mystery come alive even when the story is restricted most of the time to a moving train. Florey really gives this little programmer a lot of go! This is why I love classic films! It's got that pseudo-European thing going on - travel from Paris to Trieste on the Orient Express, high class jewel thieves, and a lot of twists in the plot. The supporting cast includes Hobart Cavanaugh, stalwarts Robert Barrat and Irving Pichel, Ferdinand Gottschalk (he's so adorable), and Dudley Digges. My love for Ricardo Cortez goes on, unabated.

Jacks, I just watched this this afternoon....shazam, what a fun ride! The absolute best part, for me, was that I read your comments first, and then had fun listening to Mr. Pichel. Knowing he was the voice of two of my favorite movies, SWAYR & HGWMV, added to the fun. And fun it was. Mary Astor has become my favorite film star. ( and Mr. Cortez....ZOWIE! )

I think it's great that Mary is your favorite. That's fantastic! She's so good, and she never really knew it. Always pitch perfect.
Top

I think, so far, my two favorites of her movies, are Dodsworth and Across the Pacific, followed closely by her Oscar winning turn in The Great Lie. I would love to have been a mouse in the corner when she and Barrymore were meeting

Nan, I have to go teach my little class this morning, I'll be back later to chat. I've missed talking to you!
Top

knitwit45 wrote:I think, so far, my two favorites of her movies, are Dodsworth and Across the Pacific, followed closely by her Oscar winning turn in The Great Lie. I would love to have been a mouse in the corner when she and Barrymore were meeting

You and me both. And I would have liked to be a fly on the wall later on, when they did Midnight together. Their scenes are so good, and kind of bittersweet. I imagine they used their own personal feelings in the film a bit at the end.

My favorite Mary Astor performance is in Act of Violence, but there isn't a movie of hers where she doesn't shine. Across the Pacific is a gem, she and Bogie are wonderful together.

Did anyone else have a GREAT time watching the Busby Berkeley musicals the other night? I really needed something fun like that! Alice watched Gold Diggers of 1933 with me. She instantly recognized Guy Kibbee from some other movie we watched, and she has taken to calling him just "Kibbee". She loves to see him turn up. She also really enjoys the BB musical numbers. She liked We're in the Money, now knows who Billy Barty is, and was gasping at the Shadow Waltz violin number, "In the Shadows Let Me Come and Sing.....To YOU." We got a glimpse of Sterling Holloway as the hat boy, and she knows he's Winnie the Pooh's voice, and she also now knows a bit about WWI and the Depression, thanks to the Forgotten Man number. I forgot how naughty this movie really is! She's getting to the age where she catches some of that. I think she was surprised.
Top

JF, I recently saw Dames and was simply blown away by Busby Berkeley's surreal imagination in the musical numbers. I'm so glad Alice is enjoying them. The Shadow Waltz is one of my favorites, too.
Top
Post Reply
91 posts