It's kind of an interesting film...like two different stories spliced together. It ended up nowhere near how I thought it would. Have you seen it Kingrat?
Top

No, I haven't seen it but will probably record it.
Top

I liked Secrets very much, I'm a big Pickford fan, the story holds together quite well.

Talking of Robert Young, I saw him in Spitfire today, not a Borzage film but an early Katharine Hepburn movie, he was totally wasted in his part and so was she.
Failure is unimportant. It takes courage to make a fool of yourself - Charlie Chaplin
Top

I always felt that Pickford remade SECRETS because she admired Talmadge's scene of the besieged cabin and the death of their baby.

Howard Hawks always said that a good movie can be made from 3 or 4 good scenes.
Or in this case, one great scene.
Gary J.
http://www.facebook.com/profile.php?id=1783165551
Top

I thought Pickford was just great at the end of Secrets. I haven't seen the Talmadge version. 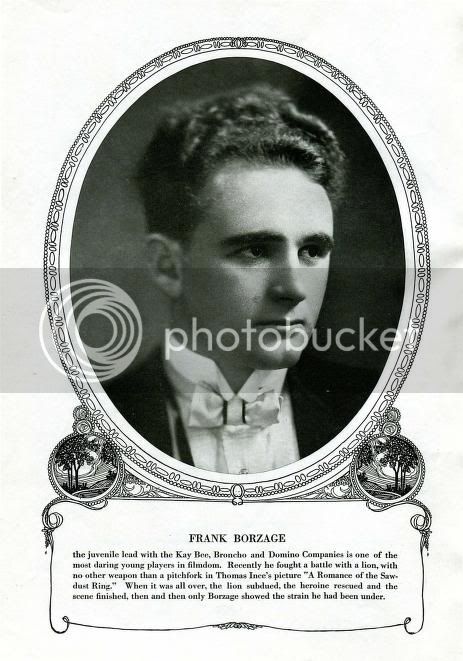 What a lovely picture of Borzage.

Talking of Secrets, Leslie Howard did the rounds as a leading man in the early thirties, it seems he squired all the big female leads on the big screen, none bigger than Mary and they played beautifully together. I have his book by his daughter which I'm looking forward to reading, by all accounts he was a ladies man not that I would expect his daughter to discuss that aspect of his life.
Failure is unimportant. It takes courage to make a fool of yourself - Charlie Chaplin
Top

charliechaplinfan wrote:Talking of Secrets, Leslie Howard did the rounds as a leading man in the early thirties, it seems he squired all the big female leads on the big screen, none bigger than Mary and they played beautifully together. I have his book by his daughter which I'm looking forward to reading, by all accounts he was a ladies man not that I would expect his daughter to discuss that aspect of his life.

You might want to read his son, Ronald Howard's book. Without being too detailed, he was quite frank about his father's extracurricular activities and his parent's differences in In Search of My Father: A Portrait of Leslie Howard.

Howard was one of the most in demand actors from 1930 on in Hollywood and his American managers were appalled when he went home to the UK (polo ponies, broken Selznick contract and all) just before the war broke out. His sense of loyalty to individuals (William Gargan and Humphrey Bogart, both owed Leslie Howard their start in film and their best stage roles) and his country was unusual then and now.

Watching the opening scenes of It's Love I'm After just yesterday, I was reminded how good he was at comedy! Wish he'd done more of them--though how often does a Pygmalion come along?
Avatar: Frank McHugh (1898-1981)

I've found his son's book in our library system, I'll book it out and read it. I've always had a soft spot for him after reading about Humphrey Bogart, without Leslie Howard they might not have been a Bogie on screen, George Raft might have played all his roles. I like his patriotism too, his demise is too sad. I love Pygmalion, Leslie Howard contintues to grow on me.
Failure is unimportant. It takes courage to make a fool of yourself - Charlie Chaplin
Top

I thought Pickford and Howard had great chemistry, they really clicked for me as a couple, both in the beginning courtship scenes, and then later on after they have made their home out west.

I realized a year or so ago that without Leslie Howard there would be no Casablanca as we know it - since both Ingrid Bergman and Bogie had their careers in Hollywood pretty much handed to them by Howard.

Did anyone get to see The First of the Few? I am so stupid to have missed the entire day, especially since I am a huge Howard fan. I remember this movie being so good, but I haven't seen it for years.

Moira, I remember the article you wrote on Leslie Howard - I almost cried when I read it, because no one seems to appreciate this actor anymore.
Top

I have The First of the Few to watch, I really must get around to it. I'll hold my hand up and admit I struggled with him as an actor, perhaps I saw too many of his early outings when he had little to do but support the leading ladies, his outings with Norma Shearer being my favorite but after seeing some of his later work, starting with Of Human Bondage and reading more about him I've reevaluated him. I'm looking forward to watching The Petrified Forest and The First of the Few. He is a hero, of that there is no doubt.
Failure is unimportant. It takes courage to make a fool of yourself - Charlie Chaplin
Top

I rewatched The Petrified Forest recently and was pleasantly surprised at how effective he was. The role fit him like a glove, and he was much better than I remember. I think this type of character is something we have trouble with in this day and age, and Howard is thought of as being exactly like Alan in his real life personality, which I think is not true. We can enjoy a Gable or a Bogart because we have a more visceral approach to life nowadays, high-mindedness is not really valued anymore.
Top

He was a incredibly heroic man, yet he'll be remembered most as Ashley Wilkes, one of the most unflattering roles of his career.
Failure is unimportant. It takes courage to make a fool of yourself - Charlie Chaplin
Top

He really hated it too, but I think he brings a certain pathetic impotence to Ashley that might not have come out had another, less thoughtful actor played him. It's taken me some time to appreciate his Ashley, and sometimes I think he's sleepwalking through it. But that certainly fits the character....
Top

THE PETRIFIED FOREST is set in a lonely Arizona desert cafe where all the characters converge, talk and get gunned down.

It's practically the definition of a filmed play.
Gary J.
http://www.facebook.com/profile.php?id=1783165551
Top

I like some "filmed plays" and this one has a lot going for it. Sometimes I want to feel as though I am seeing something dramatically staged. I personally think this is one fo the best of that type.

Have either of you seen Heat Lightning? It has almost the same jumping off point.
Top
Post Reply
166 posts

Users browsing this forum: No registered users and 21 guests