The Weirdest Movie Ever Made

The Weirdest Movie Ever Made

I had seen THE BRAIN THAT WOULDN'T DIE before. I knew it was...different. I must have been less than attentive during that first viewing. To say this whacked out piece of grotesqueness is merely different sells it far short! This super cheap, over played, "Holy ****, I can't believe they did that" shocker is 90 minutes of nightmare. First, the wrapping of a decapitated head in a blanket and preserving it on a lab tray. Again, different! And whatever you do, don't look in the closet. There's a Frankenstein like monster whose limbs appear to have been attached by a very drunk surgeon.

The Joseph Green directed B feature (and I'm being generous) seems to have been known as THE HEAD as well. The almost offensively bad cast includes such shining stars as Jason Evers, Leslie Daniels, and Virginia Leith as, well...The poorly assembled creature in the closet is played by one Eddie Carmel. I'm guessing Ed's career didn't exactly take off!

In spite of the sorrowful production and eye-popping sensationalism, the movie really is frightening. You can't believe it's happening. You can't believe you're watching it happen. But there it is, and you're not about to turn it off. An Edward G. Wood style seediness invades the night life that beckons the body seeking mad doctor. (Three guesses what he plans to with the body of a stripper!) Burlesque clubs, taverns, the requesite dressing room scene (Why do they let these lunatics in?) make for a creepy, stage setting atmosphere. No good can come of this!

A ticking, methodical pace lends an unusual suspense to some scenes. They're driving and driving. Walking and walking. He's unwrapping the...GOOD GOD! Put that thing away! The drip-drip-dripping of a moment is almost maddening. THE BRAIN THAT WOULDN'T DIE is not a good movie. I would even call it a bad one. But it's creepy, shocking and downright disturbing. And I might have mentioned, the weirdest movie ever made!
Top

Re: The Weirdest Movie Ever Made

Let's me be the first one to respond to this movie "THE BRAIN THAT WOULDN'T DIE" and I agree with you that definitely top one of the Science Fiction/Horror movies for the top dog of being WEIRD. I stunned by the nightmarish proportions of this hideous Monster so out of whack - it's beyond the creepiest of Frankenstein couldn't grasp the sheer ugliness of the Monster in this movie. And, Jan in the Pan a head that's talks - that alone makes it DOUBLE WEIRD ... I just can't grasp how weird that was ... and I agree with you it's the Weirdest Movie Ever Made ... that's cost $62,000 to make. 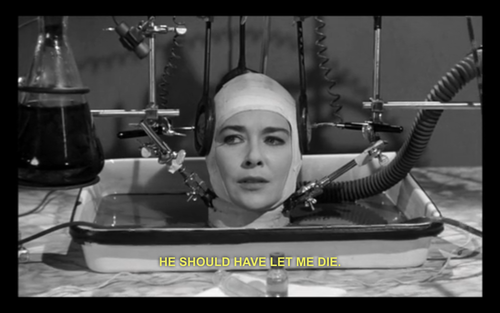 Trailer for this film.

Re: The Weirdest Movie Ever Made

Jan in the Pan! That never occurred to me! The Maven was ravin' about this camp classic on another thread. That inspired me to take another look. I'm glad I did. Now if only the nightmares would stop!
Top
Post Reply
3 posts • Page 1 of 1

Return to “Sci-fi and Horror”