Once in a while, I hear THE HORSE SOLDIERS dismissed as a lesser film by the great John Ford. Or something of that nature. Nobody says it's bad. Most people like it. But credit given it is limited. I have to say, I like this dramatic, stirring Civil War adventure a lot! The plot propels the action efficiently. The conflict, both personal and political, is exciting and tragic. The battle scenes tremendous and moving.

And those characters! Union officers Col. John Marlowe (John Wayne) and company surgeon Henry Kendall (William Holden) are determined men. The problem is, they're committed to different things. The colonel wants to complete the mission. The doctor wants to do it with as little loss of life as possible. A southern lady becomes entangled in the situation, and of course, she and the colonel fall in love. It could be said that the romance is gratuitous. That it has nothing to do with the main story. But that's true of Marty and Laurie in THE SEARCHERS as well. Nobody complains about that classic!

There's an intense scene in which Col. Marlowe gets drunk and relates the story of his wife's death. This explains his mistrust of medicine; his resentment of Dr. Kendall. It's a pressure cooker of a speech, complete with slamming bottles and smashing glasses. It's some of the finest, and most frightening, acting I've ever seen. The story leads to the conclusion of one particular incident. But the war is far over, and everyone involved must proceed with their obligations as best they can, regardless of the personal sacrifice required. "Even in Andersonville?" Wayne asks Holden as the doctor elects to stay behind with the wounded.

Second tier? Maybe when you consider the list of credits attributed to the greatest filmmaker Hollywood has ever known. This is not GRAPES OF WRATH. Not STAGECOACH or "Clementine." But if this exciting, dramatic war story is a minor achievement, that's A-OK with me. Minor league John Ford is still major entertainment!
Top

You highlight one of my favorite scenes in the picture. Not only is it a fine scene delivered by Wayne but for me the thing that makes it powerful is Ford just sets the camera still and lets Wayne carry it.

I like the contrast between Wayne and Holden. They both have a heart but they tend to show it in different places and ways.

2nd tier? Well, when you compare it to "The Searchers" and "Liberty Valance" second tier is still pretty good. I tend to think "Sgt. Rutlegde" and "Two Rode Together" as second tier.
Chris

I always loved this movie and its one of my favorite movies and I loved the chemistry of JOHN WAYNE and WILLIAM HOLDEN in this John Ford Film. Count me in as a fan of this movie and like you said RED RIVER it's pure entertainment - Bar None!

I'd actually put off watching THE HORSE SOLDIERS for the longest time because I kept hearing negative things about it and wasn't thrilled to commit myself to two hours of something I got to believe I wouldn't enjoy - Ford, Wayne and Holden (three faves) notwithstanding.

Man, was I wrong! Maybe no classic but top-flight entertainment. And if I may so so, I totally agree with Red River and movieman about the scene with Duke in the bar. That sequence alone is worth watching the movie. Completely dismisses the oft-held notion that John Wayne was a one-note actor. Duke definitely is frightening in that scene.
Top

Hearing of this film, but not seeing it, is one of my earliest movie memories. I was five years old. Saw an ad. "Mom!" No. "But Mom!" No. What was I thinking? I should have asked Dad!

Absolutely! To get artsy would have been a mistake. The scene is about one man and his sorrow. Ford was a director who knew when to move the camera and when to leave it alone. Great music in this one too. Singing soldiers, as only John Ford can depict them! "I left my love, my love I left..." It made for a terrific soundtrack album!
Top 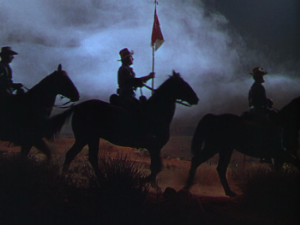 This film is one of my guilty pleasures. It is the first film I recognised as John Ford. Saturday afternoon movies when colour TV came to Australia my father and I watched it. And it had so many moments that as the critics like to say were pure Fordian. form the opening which I think is one of the best Ford opening sequences, it always brings a sense of romantic to me, to the school cadets marching out to battle, things happen which aren't really the story but add to the feeling behind the story. For me at least. The doctor helping the ex slaves, the politician, the condederate captain. And I always liked the cigar starting the dynamite on the bridge. Not sure whether John wayne stole the moment for Travis at the Alamo or Ford heard him talking about it and stole the moment from Wayne.

I think the relationship between the doctor and Marlowe was one of the very good. Marlow was not a "beloved" officer unlike many officer roles Wayne played. He was a tough hard soldier who got the job done. And William Holden was also tough enough and determined enough that the difficult relationship did not come over as bullying but a contest of equals. William Holden does not get enough credit I think for not letting Wayne and Marlowe wipe him off the screen.

This is also another one of those who says Wayne can't act. Just like the scene in the saloon wher he talks about his wife dying which I agree is one of his "best' moments, the look on his face as he destroys the railway, no words said you just know everything he is feeling.

And its not a film staring John Wayne and alot of extras and supporting actors. Its John Wayne and a group of men, and women and in a few short words and scenes we get to know those people. From Carlton Carpenter's one armed confederate officer, to Lukey, even to Chuck Haywood's officer, Hank Worden and sadly Fred Kennedy, Ford somehow gets each one of them "alive".

I read one of the producers, was it MGM who made this film, aurtobiography talking about making The Horese Soldiers, and its another example of Wayne and Ford's relationship. By the time this was made it was not a John Ford film but a John Wayne film and there was alot of issues just getting it into production, delays and arguments (not unusual with Ford). The studio bosses were very angst with all the problems Wayne would pull out especially as he was being less than communicative and his agent was unhappy. Ford kept saying set the date Wayne would turn up on set ready to go when Ford told him too. And he did, regardless of any studio politics.


dee
Last edited by tinker on March 4th, 2014, 5:01 pm, edited 1 time in total.
But I, being poor, have only my dreams; I have spread my dreams under your feet; Tread softly because you tread on my dreams. (William Butler Yeats )
How did I get to Hollywood? By train. (John Ford)
Top

This may well be John Ford's strongest asset. The sub-story is at least as important as the plot.

William Holden does not get enough credit I think for not letting Wayne and Marlow wipe him off the screen.

Holden has his work cut out for him, but he's up to it. He commits himself admirably.

Welcome to Hollywood. It's all about "The Face." I'll bet few actors could compete for control with John Ford. If anybody could hold his own, it's The Duke!

dee
But I, being poor, have only my dreams; I have spread my dreams under your feet; Tread softly because you tread on my dreams. (William Butler Yeats )
How did I get to Hollywood? By train. (John Ford)
Top
Post Reply
8 posts • Page 1 of 1