I just finished the Glenn Ford book last night as a matter of fact.
Have you heard Robert Osborne talk about her?
He KNEW her! Imagine.....

As far as programming, we love hearing from you. I sit near that department and if you would like to submit a list of titles to me through the Silver Screen Oasis, that would be great. I could check back to see what is submitted.
Also you can write to me in care of TCM, 1050 Techwood Drive, Atlanta, GA 30318.

Blood and Sand - again a Fox title so we will have to license - which we are doing more and more. We have been showing a lot of Columbia titles - including early Glenn Ford and some Rita.

I am thrilled to tell you we will be showing LAURA finally so each month, more and more Fox, Paramount, Columbia and United Artists.

Thanks, Rita, for taking time out to contact me.


About, Robert Osborne - talks about Rita - I have a DVR recording of him talking about her and its locked - so I can watch it anytime I want and believe me - he speaks volumes of her - literally.

I will write you in care of TCM - about a list of movies that I want TCM to show. I need time to write it clearly as possible.

I do have Blood and Sand on DVD - and its one of my favorite movies of Rita - and I consider it her breakout films that launched her into Superstardom. That Movie has star power - Tyrone Powers, Linda Darnell, Rita Hayworth, and Anthony Quinn ...

I love LAURA and I do have it on DVD - and its a fabulous movie starring the gorgeous Gene Tierney who is happen to be good friend with Rita Hayworth and her role in that movie - one of the most beloved Film Noirs of all time.

Again, thanks for responding to my questions - and I will try to come up with more later on this weekend.
Top

And thanks so much, PT! Alexa has so many resources at her fingertips when she is on the job, I'm sure we will learn more! It might even make a great interstitial for TCM's original productions. Wouldn't it be fabulous to have it appear right before a screening of Meet Me in St. Louis?
Blog: http://suesueapplegate.wordpress.com/
Twitter:@suesueapplegate
TCM Message Boards: http://forums.tcm.com/index.php?/topic/ ... ue-sue-ii/
Sue Sue : https://www.facebook.com/groups/611323215621862/
Thelma Ritter: Hollywood's Favorite New Yorker, University Press of Mississippi-2020
Avatar: Ginger Rogers, The Major and The Minor
Top

Hi Alexa,
Thanks very much for visiting us. Could you please tell me how you go about researching a film being shown for the first time? I realize that IMDb and the AFI databases are an enormous help (even though they are not always perfect), but I am curious if you also go to other sources, particularly oral histories. Is there time for that kind of research, or is time always tight? Do you have to prepare copy within the parameters of a set amount of time? How far ahead do you know that Mr. O. is going to be introducing a particular movie? Do you ever ask Robert Osborne questions about people or films he may have known well?

Is there any factoid you can share here that you wish you could fit into an intro or outro, but cannot due to time or content restraints?

If John Fricke doesn't know, then forget it.
He is a great authority - and a NICE guy. He is enthusiatic and he loves sharing his movie knowledge!
Top

My father taught an educational program to foreign-born students about American film, politics, and the military. He was inspired to do it through his friendship with the late filmmaker Frank Capra. While teaching the program he got to become friends with and interview people like Jimmy Stewart, Billy Wilder, Claudette Colbert, Gregory Peck, Kim Hunter, Barbara Stanwyck, etc. Each interview averages an hour in length, some of them go on for several hours. I've been uploading portions of these interviews from our archive and as a Senior TCM Researcher, I'd love to know your thoughts on them. Perhaps TCM or some other entity could find a use for them. You can find them here:
http://www.youtube.com/orcodevelopment

And if you're interested to know more about my dad's program you can find that info here: http://www.orcodevelopment.org

Feel free to contact me if you have any questions, and thanks so much for visiting us!

Oh and just for kicks, here's a pic of my dad with Billy Wilder and his absurd amount of Oscars 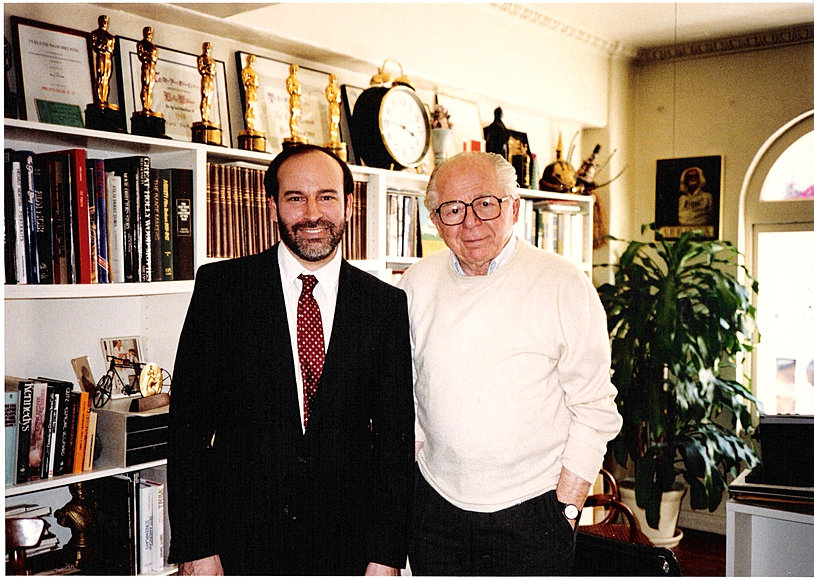 Well, just in case it's not an entirely lost cause

here are a couple of screen caps SSO member pvitari created and posted into the discussion on MMISL, where the mystery woman is seen clearly:

It's possible that the JGMB member who identified her last year as Charlotte Hunter could be accurate -- Mr. Fricke gave no feedback to that post.
Top

Nice to chat with you again.
That is a great question. For any new titles on the channel, I use books first. I have built up quite a nice book library of autobiographies, biographies, studio histories, The Films of..., and yes we all know that not all of the stories are accurate but Robert or Ben will usually mention the source of a quotation so the viewer can assess the source.

Don't get me started on wikipedia...I can tell when a script writer is using it and it makes us look sloppy and lazy.

I use IMDB for a structure of credits - and hey when I started there was NO INTERNET so I photocopied everything from books. Then I use the American Film Institute for behind the scenes as well as production dates and release dates. There are mistakes there also, so you must always double check. We have over 300 archival interviews, and I can check the transcripts, as well as going to the Film Noir Foundation interviews and the TV Academy interviews. I can watch You Tube to check plots and pronunciations.

It is priceless to be able to call contacts like Rhonda Fleming or Richard Anderson or Carleton Carpenter to check facts. I check with Robert a lot of the time since e-mail so so easy. (Remember life without email?) We also are always learning new stories as with the Kim Novak interview at the TCM Film Festival. Robert and I are also aware that star biographies were "created" by the studios and sometimes it takes some digging to get to the truth.

I have at this point finished the titles for December so time is not too tight. When I started, ALL titles were new, so now it is much easier.

Thank you for a question on TCM research techniques.
Top

Thanks, PT, for sharing those images. We can really see her up close and personal!

I also want to clarify to members that Alexa's SSO member/username, Mrs. Osborne, is just her screen name, not her legal connection to Robert Osborne! But she is so closely allied with his work and his persona at TCM, that she felt it would be an adorable screen moniker, and I completely agree!

OMG!
That photo says it all, doesn't it.

Those interviews are PRICELESS. And while we are on the subject, please don't forget to interview your older family members. I wish I had interviewed my grandparents. I can watch my interview with Laraine Day, but I was not wise enough to interview my own family.

You are so generous to put these interviews on-line. I will take a look and would love to follow up with you.

Thanks so much.
Top

We also never got to chat with Ruth Hussey, Phyllis Thaxter, Simone Simon....not that we didn't try! We kept calling.
At least we got a Voice Over with Doris Day for her Star of the Month.
Top

We also never got to chat with Ruth Hussey, Phyllis Thaxter, Simone Simon....not that we didn't try! We kept calling.
At least we got a Voice Over with Doris Day for her Star of the Month.

I took a quick look at the list I keep of my dad's archive, turns out he interviewed Harry Morgan, Ruth Hussey, and Phyllis Thaxter

Sorry it has taken so long to respond...I had to pick myself up off the floor!!!

Thanks PT, I hope Mr. Fricke is right! I knew the 2 Dorothys were not her, she wasn't in The Harvey Girls.
Thanks, "Mrs. Osbourne" for letting me hijack this thread...
Now back to our scheduling programming!!!!

(and I have been known to knit - furiously- in public)

The Doris Day voiceover was fabulous! I linked it and watched it several times. Absolutely lovely!

Joan Fontaine and Olivia De Havilland are the ones! In some parallel universe, Mr. Osborne is talking to them before they introduce some of their favorite films from their careers, and explaining why they decided to call a truce right before they reach the latch on the pearly gates of classic film heaven.

How wonderful! Those are great interviews to have.
What a goldmine. Ruth Hussey and Phyllis Thaxter could tell us a great deal about MGM.
Believe it or not, Harry Morgan was incredible shy and did not want to be seen on camera so we suggested audio only and it never happened.

Moirafinne -
I cannot tell you how many hours and hours of archival interviews we have that could be used for Word of Mouths. It just depends if the programming will support the time it takes to edit the pieces and get them on the air.

Again, thanks, and I have put in a call into my favorite Judy expert for an answer to the mystery woman.
Top
Locked
110 posts