Hi Scott. I want to thank you for answering my previous questions.

It surprises me though that "The Spiral Staircase" has not been mentioned thus far. I thought that he gave a fine performance. Did he get good reviews for that performance?
Thank you.
Joe
Joseph Goodheart
Top

Brent didn’t care for his performance in The Spiral Staircase saying, “I was not very convincing.” Critics thought differently – Variety called it an “out of the ordinary portrayal." Author/historian Anthony Slide said there was high praise to be heaped upon Brent and Ethel Barrymore (who had been impressed by young Brent since seeing him on stage at Elitch Gardens in 1929). According to a 1992 Dorothy McGuire interview the menacing eye close-up was not Brent, but director Siodmak. Siodmak thought it would help conceal the true identity of Brent's deranged killer.

I was surprised by some of the outre analysis of Brent's character by contemporary authors of the Gothic horror genre, saying he was "inflicted with sexual impotence" - a "latent homosexual" - "a castrated man" - "a man in search of a bathroom".

Brent would have laughed his head off at these analyses.
Last edited by oscotto on October 26th, 2014, 11:52 am, edited 1 time in total.
Top

I always thought of him as pure class in films. I visited his thoroughbred ranch many times and it too was not ostentatious . . . highly functional but very elegant.
[color=#0000BF][i]Avatar: John Cantarini (Martha's husband) on future world record holder Crazy Kid. He won six in a row
on him.[/i][/color]
Top

Rerun:
Glad you mentioned your visit to Brent’s ranch. His enthusiasm for horses and racing prompted him to take out a license as a trainer (1961). Shortly after he received his license he enthused, “I love the atmosphere of racing, the life around horses and the friendships I have made. My horses … do not know what meanness is. No one is allowed to shout or curse at them around this barn.” George was up at 4 am and in bed by 9:30 each evening. He told Hedda Hopper at the time, “Horses are more interesting than people.”

Above: George Brent with his daughter, Suzanne.
Top

Hi Scott,
The research you do on your books is amazing...a real treat for film fans such as myself. Among George Brent's missing Fox films is Charlie Chan Carries On. There's lots of speculation about a fire that destroyed many early thirties Fox films, but no one seems to know when...did Brent's missing movies like Carries On and Ex-Bad Boy ever make it to TV? Any idea of when the fire took place or whether there are any active searches going on for these films?
Also, in doing research on my own book about Republic, I came across Brent's Rin Tin Tin serial for Mascot, The Lightening Warrior. How did George go from Fox to Nat Levine's small studio?

Many thanks for being with us,
Brian McFadden
Top

Hello, Mr. O'Brien, and welcome to the Silver Screen Oasis. Your revelations have been very interesting.

As you know, George Brent appeared on stage with Glenda Farrell on Broadway. As I am a big fan of Glenda Farrell, I was wondering if you had any interesting anecdotes about her that you discovered during your research?
Top

Hello Brian,
From what I learned, it was a fire in a New Jersey-based nitrate film vault (1937) destroyed most of Fox studio’s pre-1935 releases. The prints that survive are most likely copies from films that were still in circulation. Ex-Bad Boy was restored by Universal and shown at Capitalfest in the summer of 2012. I found a copy of the script for Charlie Chan Carries On (on-line) and that offered me some semblance of Brent’s role.

Brent and Rin Tin Tin
George Brent suffered from a severe eye condition in early 1931 and left Hollywood. After his recovery he received an offer from Mascot at the behest of producer Nat Levine, who thought Brent had promise. Lightning Warrior was Rin Tin Tin’s swansong and proved to be quite popular, but it brought Brent’s film career to another standstill. Ruth Chatterton came to his rescue after seeing one of the screen tests George did at Warners in November-December 1931.

BTW Brian, did you ever have the opportunity to interview Sylvia Sidney? She’s my next subject.
Top

It’s always a pleasure to watch Glenda Farrell (I especially liked her in Keyhole). She had a handle on comedy, where Brent usually struggled with it. Their two film efforts: Snowed Under (1936) where she is hunting him down for alimony, and Twin Beds (1942) where Brent looks ill at ease and Farrell seems lost in the hokum of a poor script—were disappointments.

New York critic Arthur Pollock commented in his review of Broadway's Love, Honor and Betray (1930) that Brent and Farrell (as a romantic duo) “stood out by virtue of their moderation.”

Wish I could tell you more about Brent-Farrell, but that’s it. Thanks for joining in today.
Top

So glad that Brian brought up The Lightning Warrior (1931), which is great fun. Brent comes across as impossibly young and was very peppy throughout the action-oriented serial which also featured Frankie Darro and stunt man Yakima Canutt in impossible feats of derring-do. 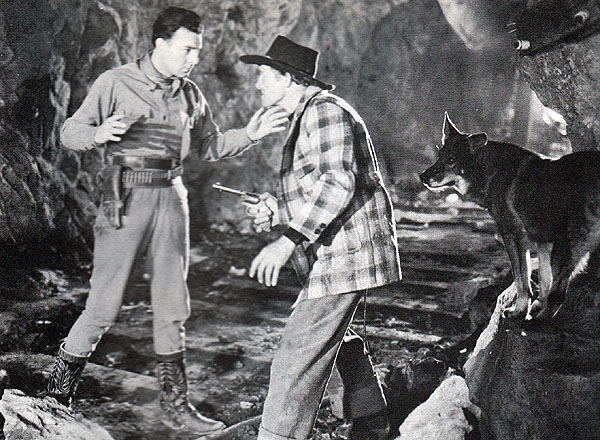 Above: Bob Kortman has the drop on George Brent in The Lightning Warrior (1931), but is that Rin-tin-tin about to turn the tables on him?

Here are a few more questions about your subject that I wondered about, Scott:

1.) Did George Brent ever go back to Ireland? Did he want to or was it difficult for him?

2.) While researching this book, did you have contact with his children or other family members as you have when researching your previous books? Did they paint a portrait of their family member that was different than you expected?

3.) Was there anything you learned about George Brent while writing this that surprised you?

Thanks again--and my thanks to all members who are participating in this event. I hope you will keep asking questions of our guest today! You guys are what makes this place lively.

Moira - Love that pix from The Lightning Warrior. George looked like he was having a good time in this (except when he donned an Indian headdress). I wonder how he would have done with Massacre ((1934) a film that championed the ongoing plight of Native Americans? It’s one role that he campaigned for (it went to Richard Barthlemess, who did a fine job with it). I wanted to add that I’ve tried to download photos (hence all my SSO edits), but the system won’t let me – my files are all too big.

Back to Ireland 1966-67:
Brent decided to transfer his thoroughbred business back to the old sod in 1966. His family went with him. While mixing the best of Irish bloodstock with California horses, Brent made his debut at The Curragh, Ireland’s racing headquarters in County Kildare. Though his horses fared well on Irish soil, Brent did not. “We almost froze to death,” he said afterwards. While there a member of the IRA approached him at Dublin’s Shelbourne Hotel dining room and told him, “We want to let you know that we haven’t forgotten.” Brent was very touched. Dublin director Brian Reddin told me that Brent was always considered “Our Man in Hollywood.”

Director Reddin put me in touch with Brent’s daughter Suzanne, who told me that she and her brother Barry were working on a project about their father. She confirmed that Brent’s mother had died on Long Island and mentioned a couple of her cousins. I hope that Suzanne and Barry’s project is going well – hopefully we’ll hear more about it. I did contact two of Brent’s grand-nephews. Ian Watson (son of Brent’s nephew Patrick, with whom he was very close) was especially helpful and sent me a log book from Brent’s participation in a 1947 San Pedro-Honolulu yacht race. It was a hoot to read. Brent referred to it as “Operation Miserable.” Frank "Wizard of Oz" Morgan, BTW, won that race!

As an adult, Brent was estranged from his mother and all his siblings except his sister Kathleen (Patrick’s mother). As I mentioned earlier, Suzanne and Barry enjoyed their father’s eccentricities and need for privacy. I think the challenges of his childhood and activity in the trauma of war as a teen explain a great deal about the man.

Brent’s proposal and affair with shimmy queen Gilda Gray surprised me. His prolific stage career came as a surprise – he was quite enterprising with all his stock companies while he was still in his 20’s. His bout with blindness. His desert retreat to escape from Hollywood. His provision for an evacuation shelter for Hawaiian children at the outset of WWII (he owned acreage on Oahu). The excellence of his TV series Wire Service … his marriage proposal to Jane Powell ...and lots more.
Top

Thank you for the info about Brent's return to Ireland. I suppose he had been acclimated to Southern California for so long that Eire's lack of central heating probably affected him more than he had anticipated. I love the idea of a yacht race with GB and Frank Morgan as participants--what fun.

Did either of Brent's children pursue acting as a career?

I am sending you a PM about the issue with your pictures. Please let me know if I can be of help.

1.) What was the experience like for George Brent to make films in the UK, and what did he think of Diana Dors in Man Bait (1953)--a guilty pleasure of a movie if ever there was one? Did he like working for Hammer?

2.) The television series you mentioned, Wire Service (1956-1957), sounds intriguing, esp. since Brent worked with Dane Clark and Mercedes McCambridge on the show. Do any of these Desilu-produced shows still exist? Are they on DVD anywhere? Thanks again.
Avatar: Frank McHugh (1898-1981)

Good afternoon! Hope you are enjoying this glorious LA weather we are having today!

You wrote a bit earlier about George Brent's horse ranch and many stars from Barbara Stanwyck to Joel McCrea to Randolph (cue chorus) Scott had ranches here in the San Fernando Valley and I was wondering where Brent's was located.

Thanks in advance!
Lynn in Lake Balboa

Moira:
Barry Brent has pursued an acting career. While he was alive, George was very proud of the 6’ 4” Barry’s success. “He’s so talented,” said George in 1978. He’s just done The King and I in college. One day soon you’re going to hear of him.” Suzanne was in interior design while Brent was alive.

Man Bait
I enjoyed watching Man Bait – it has a Hitchcock-feel to it and the acting and odd-ball characters are enticing throughout. One critic mused that “Brent … can’t quite compete against the sultry charms of Diana Dors in this murder tale.” When asked about the film in 1960, Brent said, “It was so bad I don’t even remember the name of it.” I disagree. I came across no comment from Brent about his amply lipped co-star, sorry.

Wire Service
I was able to discover several of Brent’s episodes on DVD. Ebay, ioffer, etc. should provide access to them. Clark, McCambridge and Brent each starred in their own individual episodes and did not work together. I was impressed with the progressive slant in Wire Service, great photography and direction.
Top

Brent's ranch was in Rancho Sante Fe. He moved there in 1958 after purchasing a hilltop two-story home resting on forty acres from John W. Rice, Jr. a brick manufactuer. Brent converted his acreage into a breeding farm and added a 5,000 square foot barn. The home was off Rancho de los Flores.
Top
Locked
47 posts