Thank you so much for joining us here at The Silver Screen Oasis, Scott! I have been enjoying all the wonderful questions and your responses continue to intrigue me. I can't wait to read your book! 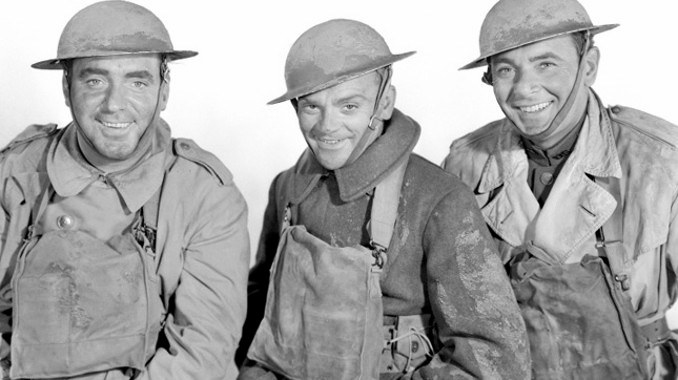 Brent had a bad case of influenza during the shoot. “I got real sick,” Brent later recalled. “Spots came out all over me; fingernails fell out with the fever—toenails came off. You’d just choke to death. But I got through the picture alright. This was my only picture with my good pal James Cagney.” Cagney said that the studio considered replacing Brent, but Cagney stood up for him, saying that Brent was an essential ingredient to the film. The two friends remained in contact until Brent’s demise in 1979.
Top

Thanks for filling that part of the picture in, Scott.

Thanks for inserting the photos to my responses Moira.

I forgot to mention that Brent became a US Citizen in 1937. As WWII approached he wanted to do his part. Brent had his heart set on being an instructor at the Civil Aeronautics Institute in Oxnard. He negotiated with Warners to postpone his last film under contract (My Reputation one of his best films). Due to a previous spine injury in 1941(he had had surgery) he only lasted a few months in the Air Corps. He tried a similar stint with the Coast Guard. He found it difficult to sit for long periods of time. He received a medical discharge in May 1943. He wanted to film The Raft, based on the true experiences of three US Navy Fliers who survived thirty-four days in the Pacific without food or water. He dropped the project, but the film was finally made this year as Ghosts of the Pacific (due for a fall 2014 release).
Top

Please consider yourself invited to come back anytime in the future!
Avatar: Frank McHugh (1898-1981)

Thanks, Moira! Scott, your comments are much appreciated! Thank you for visiting us here.

Moira –
I too have a special fondness for From Headquarters—another overlooked gem. It had a visual flourish for the intricacies of forensics. Detective Brent is focused, and engaging as the love-torn detective. Brent commented that Dieterle was “a good man and easy to work with.” Brent said that it was Dieterle that was in charge of the screen test that got him is Warner contract in December 1931. Dieterle also directed the Chatterton-Brent film The Crash (1932).

I thought the Brent-Lindsay combination was worth a repeat. They were in some scenes together in Jezebel, but Gold is Where You Find It (1938) focused on Brent and de Havilland. I don’t recall any tandem scenes of Lindsay-Brent in Baby Face (1933). I made a point of getting every comment that Brent made about his co-stars and directors. Sadly, nothing (so far) on the excellent Margaret Lindsay. She always made a distinct impression on me from playing Kay Francis’ gambling addicted daughter in House on 56th Street (1933) through the hostess of a swank party in Doris Day’s Please Don’t Eat the Daisies (1960).
Last edited by oscotto on October 26th, 2014, 10:03 pm, edited 2 times in total.
Top

The thoroughbred ranch I went to was called Royal Oaks Farm. The address was technically Camarillo but if memory serves me it was 1000 Oaks. Unless there was another. I think that, however, there is a fine line between 1000 Oaks and Camarillo. It was a long time ago. This was in the mid or early 70's.
[color=#0000BF][i]Avatar: John Cantarini (Martha's husband) on future world record holder Crazy Kid. He won six in a row
on him.[/i][/color]
Top

P.S. I see it is not listed in the 1960 Racing Manual but is in the 1958. Could be that the ranch I am remembering was: "you know, George Brent's place!" It was called Royal Oaks and I do remember that for sure and Camarillo may have been the mailing address. I am sure it was 1000 Oaks. And, he may have still owned it then. Sigh . . . .
[color=#0000BF][i]Avatar: John Cantarini (Martha's husband) on future world record holder Crazy Kid. He won six in a row
on him.[/i][/color]
Top

Sylvia is certainly the most prolific of actresses. Her career spans from 1926-1999! Of course, she and George had to cross paths at one point (a 1955 TV Climax! presentation--a photo of them is in the Brent bio). The neat thing about Sylvia is that she offered so many candid, ballsy interviews in her 70's and 80's. She threw discretion to the wind ... delightfully so. I have all her films and a number of her TV performances. She had a way of immersing herself into her characters that was never actress-y or showy. She could care less how she looked and it always paid off. She considered Mary Burns, Fugitive, her personal favorite film.
Top

Rerun –
I should have mentioned that Brent and his wife (who was ailing from cancer) relocated from Rancho Sante Fe in 1973. They moved to Solona Beach—a short walk from the Pacific Ocean. It was reported that he sold his horses in order to take care of his wife. I'm not sure if he ever sold the ranch itself.
Top

Thanks so much. It has been a real treat to have you here. Thanks again and best of look with the book.
[color=#0000BF][i]Avatar: John Cantarini (Martha's husband) on future world record holder Crazy Kid. He won six in a row
on him.[/i][/color]
Top
Locked
47 posts