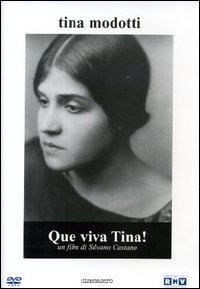 http://en.wikipedia.org/wiki/Tina_Modotti
Italian photographer/model/actress (1896-1942), Tina Modotti also starred in three American films between 1920 and 1922. Only the first, The Tiger's Coat (1920), survived in a 16mm reduction print, restored by La Cineteca del Friuli and now available in this boxset. Also included a 51-minute documentary by Silvano Castano (in French, with Italian subs) and a 100+ photo gallery, with images from Modotti's lost films.
http://www.amazon.it/Tina-Modotti-Cofanetto/dp/B0025YLOIQ/