Another Stageshow, Another Feature Film

Another Stageshow, Another Feature Film

Rob Marshall to direct film musical "Nine"
They won the best picture Oscar with 2002's blockbuster "Chicago," and now director Rob Marshall and producer Harvey Weinstein plan to adapt another hit Broadway musical for the screen. This time, the production is "Nine," which won the Tony for best musical.

The Weinstein Co. said Thursday that Marshall will direct the adaptation, with Maury Yeston, the composer and lyricist for the original 1982 production, reprising his songwriting roles. A screenwriter has yet to be named; the original book was written by Arthur Kopit. John DeLuca, who worked with Marshall on "Chicago," will choreograph.

Adapted from Federico Fellini's autobiographical "8½," "Nine" is a surreal look at the professional and personal struggles of fictional Italian filmmaker Guido Contini. A 2003 revival of the show starred Antonia Banderas and won two Tonys, including best revival.

Wow!
I would have never thought of "Nine" as a possible film project but it excites me to think it may happen. This is more fun than the Tim Burton/Johnny Depp "Sweeny Todd" project. Being so cinematic in its concept gives it a definite boost to transferring to film successfully.

Now, who would make a good middle-aged Italian to play the lead? (Antonio Banderas, who did the revival in 2003 better not get the role.) 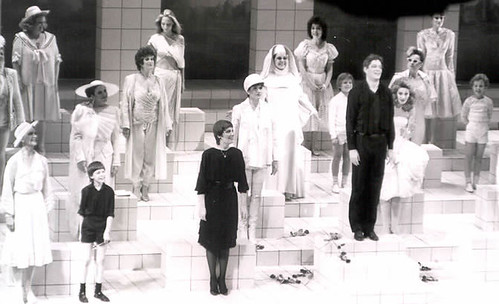 I enjoyed everything he did.

He also had a role in a cable movie where he went back to Cuba. Fred Ward was also in that. And the name of an actress who has also passed escapes me, but she played his pre-Castro era true love whom he risked everything to find. Beautiful kind of noir story in the midst of an action/adventure fling. Antonio Vargas had a great role in that, too.

Of the 22 women in the Original Production, this role was the most memorable - 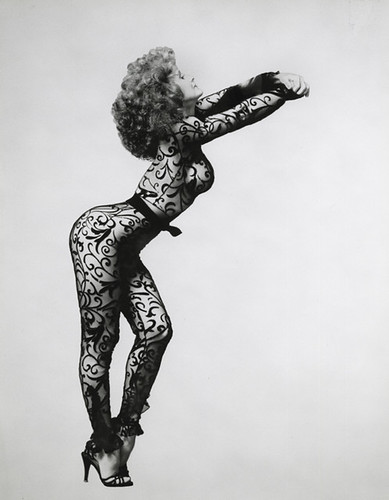 "Wow", again.
With the right casting, this could be a fun film.

I just saw Rob Marshall's last non-musical film, Memoirs of a Geisha, which was a beautiful eye-full of Japanese arts and crafts. Wish that it had captured more of the book's enchantment, but hope for the best for Nine. I also wish that Raul Julia & Anita Morris were still with us, though I loved Kyle's pictures that evoked their skill, and, um, in the case of Ms. Morris, her considerable charm. Raul Julia's part in Kiss of the Spider Woman (1985) was outstanding. I'd like to see the other Raul J. film that you mentioned, Sue Sue, Florida Straits.

I'm racking my brain trying to think of someone other than Antonio Banderas who might win the role of the director in Nine, but everyone I've thought of so far is too long in the tooth. The only movie in which Antonio B. really came across to me was the Zorro movie, but that may also have been because of Anthony Hopkins and Catherine Zeta Jones too. Do you think that Ms. Jones might fill the role of one of the ladies in Nine rather amply?
Top

One of the first names I came up with for the male lead was Hugh Jackman but then thought he really couldn't believably pull off the "Itallian thing". He may not be a convincing 40-something year old either. But he certainly could do the singing and acting.

Thankfully, Ricky Martin is still too young to be considered or I bet he'd be on the list while, sadly, Kevin Kline is probably too old to get away with it in a movie.

As for any of the women, Catharine Zeta-jones would make a very good put-upon wife. But I am going to goad 'sandykaypax' into sending in her picture & resume. I bet our "Mrs. Bennet"/"Mrs. Lovett". et.al., would be wonderful in the role of a former Follies Bergeres star who is now Guido's producer. The following lyrics just seem like they would come so naturally to her -

"The cinema today is in a crisis.
Directors are so existentialist.
Their movies are not worth their entrance prices
if no one sings a love song when they are kissed"

Wow !! Too bad she died so young. A Beautiful woman and an excellent actress. Thank You for posting.

She was great in Ruthless People. I used to have an outfit like that, but, sadly, my ecdysiast days have escaped me.
Blog: http://suesueapplegate.wordpress.com/
Twitter:@suesueapplegate
TCM Message Boards: http://forums.tcm.com/index.php?/topic/ ... ue-sue-ii/
Sue Sue : https://www.facebook.com/groups/611323215621862/
Thelma Ritter: Hollywood's Favorite New Yorker, University Press of Mississippi-2020
Avatar: Ginger Rogers, The Major and The Minor
Top

IMHO Anita was the best thing in Ruthless People. Wow, what a sexy lady!

Ken123 -
You're most welcome. I wish I had a scanner so I could post the photo from the insert card in the OCR cd of "Nine". In that photo, all the major female actresses are featured. It is a wonderful image. Maybe 'filmlover' could do a scan????

I hope the film really tries to stick close to the original casting ideas. There is only one ingenue role and I bet even that role on Broadway was played by a woman close to thirty years of age.

I would have no problem seeing this feline "Carla" over a Botticellian "Carla" in the film version.

In fact, with the roles as written (Mothers/Nuns/Spa Owners/Wives/Film Critics, etc.), it will have to be film of Adult Women. And that should be a wonderful thing.

Sue Sue Applegate wrote:She was great in Ruthless People. I used to have an outfit like that, but, sadly, my ecdysiast days have escaped me.

Ahh. The outfit may be gone but photos are forever. Any you might want to shed, err, share?

From Stage to Film

Kyle,
Again Thank You VERY much for the Anita pics.

I LOVED Anita in "A Sinful Life" and "The Hotel New Hampshire."
As for the lead in "Nine-"what about that other hunk from Spain, Javier Bardem...