Today marks the 72nd anniversary of Pearl Harbor and the subsequent entry of the U.S. into WWII on December 7th, 1941. Inevitably, as this watershed event becomes more distant in our collective memory, there is less discussion of this event. I doubt if anyone reading this had a family member alive then whose life was not affected in part or whole because of this day.

We may still be too close to the events to fully understand all the ramifications of this attack on that day in world history, but I thought that a moment to note the date might be of value. For the record, 2,403 American troops and civilians were killed that day. 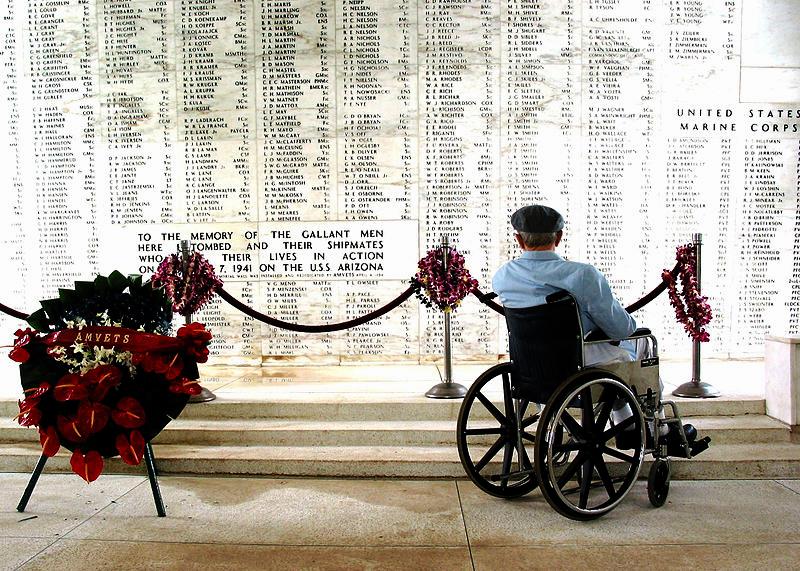 I do know a Pearl Harbor Survivor that lived in my Hometown Seattle and he has dementia and doesn't do well with people and the last time I saw him was 5 years ago. He is still living today and I would put his age around 92-95 years of age and the only one in my area is a survivor of that battle 72 years ago.

He maybe in his last legs and according to his relatives he and a buddy of his were credited of knocking down a ZERO in flight and received a Bronze Star for his heroic effort.

I have many family members that served in Armed Forces and I just wanted to share this tidbits of information to all of you today. We need to take a moment and thanked our Veterans that served in all wars and they should not be forgotten.

Thanks for reminding us Moira and appreciate the kindness towards all Armed Forces Personnel ... I salute you!
Top

The radio series The March of Time covered the first week of war, broadcasting on 11 December 1941, four days after the Pearl Harbor bombing. An MP3 of the broadcast can be downloaded from this page.

This episode of the radio series Author's Playhouse, aired a year later on 6 January 1943, dramatizes the experiences of a submarine sent it response to the attack, Off Tokyo Bay.
Top

My mom could account for her whole day upon hearing the news. My father? Like thousands of men, he enlisted a few days later. For the rest of his life, he was no more proud of anything.
Top

Above: Allied soldiers in the surf under fire in Normandy on June 6, 1944. [Photo: Robert Capa]

Lest we forget, 70 years ago today the Allied nations were engaged in a worldwide struggle for freedom, as seen in this photo taken by Robert Capa that day, when the invasion of France began on D-Day in Normandy. Over 150,000 men were part of that day's events. 9,000 died that day, with many more, including some 20,000 French civilians, perishing alongside another 21,000 German forces.

Our interest in classic Hollywood will abide and return to preoccupy us here tomorrow, but here's a moment to think about the brave, the scared, the fallen and the individuals who lived on and rebuilt our world as best they could. Thanks to them, we know liberty. As President Obama said this morning in France: "When the world makes you cynical, stop and think of these men."
Avatar: Frank McHugh (1898-1981)

Every time I see anything having to do with D Day or Iwo Jima or any of those battles I am in awe of what these soldiers did. Knowing that they were going into a situation they would likely not survive but go they did. Always against incredible odds and at tremendous risk they went on. How they did it I don't know as I can't know how I would have been in those same situations.

So many were so young. I've been watching "Band of Brothers" again recently and before each episode there has been a couple of short interviews with men who were part of the story. Their recollections are frightening and touching. To a man they didn't see themselves as heroes but always those that didn't come home were the heroes.

My father lost a cousin in the Battle of The Bulge and another on June 7 in Normandy. One is buried in Belgium and the other France. (the family has the letter from the War Dept. giving the location of his grave.) Two boys from a little east Tennessee town sacrificed it all.

I wonder if schools teach about this day. Too bad for the children if they don't.
Chris

Thanks so much for all the posts about D-Day and the soldiers who fought there.

Several years ago we were with an American tour group on Omaha Beach. It was March, and we had the beach almost to ourselves. A tranquil place, with the sand and the waters of the English Channel. There's only a gentle rise from the beach, not even a good-sized hill, but when you see the concrete boxes where the Germans had their machine guns, you wonder how any of the Allied troops survived.

The American cemetery not far from the beach is well-kept, with a relief map which shows the troop movements. Those who died are being given the honor they deserve.
Top

The Greatest Generation, they call them. I can agree, having been raised by a couple of them. My grandfather passed away last March at 93. He didn't serve in the military due to a mild heart flutter, but he worked for a company (Sperti) that manufactured products for the War Dept and was as involved as he could be.
Top

The ending of Band of Brothers :

"From this day to the ending of the world,
But we in it shall be remembered-
We few, we happy few, we band of brothers;
For he to-day that sheds his blood with me
Shall be my brother"

The original radio broadcasts for the D-Day invasion are available for listening on archive.org:

I was too young to clearly remember December 7th. My first memory of the war was in the first grade, when we stopped moving our hands from our hearts to point to the flag during the Pledge of Allegiance (too much like the Nazi salute).

I do, however remember D-Day, as well as the siren at the milk company going off, when I was on my way home from school, to announce V-E day; and the horrible news two months later of the A-Bombs; and the joy and relief at the final end of the war.

We owe a lot to those who didn't come back. Not least of all, the fact that, thanks to their sacrifice, we've gone 69 years without another World War.
AVATAR: Billy DeWolfe as Mrs. Murgatroid, “Blue Skies” (1946)

Kudos to WWII veteran Bernard Jordan of Hove, England. Mr. Jordan and his wife live in care facility and he had asked the facility about going to Normandy for the D-Day reunion. The facility was unable to make those arrangements and told Mr. Jacobs they were unable to do so.

On Thursday morning, Mr. Jordan got up and dressed for a trip into town. It was a bit blustery out so he wore a raincoat.

When Mr. Jordan did not return to the care facility, the staff reported him missing to the local police.

A short time later, another slightly younger veteran called to say that was all was well and Mr. Jordan was with him and they were staying in a hotel. They were going to the D-Day reunion the next day. They had met on a bus on the way to Normandy.

Mr. Jordan was wearing his medals which he had concealed under his raincoat when he left the care facility. He had served with the British navy during Operation Overlord.

Mr. Jordan and the other veterans attended the 70th anniversary of D-Day tributes and then Mr. Jordan returned home to the care facility in Hove.

He told a reporter that he would return to Normandy next year for the D-Day ceremonies.

Thanks so much for filling in the blanks on this story, Lynn. I just heard the headline that this gentleman had run away from the nursing home and silently wished Mr. Jordan well. So glad he made it and hope that people of means step forward to make it possible for him to attend the commemoration next year.
Avatar: Frank McHugh (1898-1981)

Moira suggested I post this link to this story of four of our most beloved actors, Ronald Colman, Claude Rains, Herbert Marshall and Basil Rathbone, and their extraordinary valor in World War I. Honestly some of their stories are so incredible that they would have been rejected by Hollywood as too fantastical, including Rathbone launching a daring daylight raid on the enemy disguised as a tree. They also talk of the fear and despair they felt in this ghastly war, which continued to haunt them upon returning home. And Rathbone speaks lovingly of the brother he lost.

This was really a labor of love for me; I was happy to spread the word about these amazing men. I hope you feel inspired by it too.