Christina Rice, the author of the much anticipated forthcoming biography, Ann Dvorak: Hollywood's Forgotten Rebel (Univ. Press of KY), has kindly agreed to visit The Silver Screen Oasis on Sunday, Nov. 17th and Monday, Nov. 18th. The thread where you can post your questions is here. 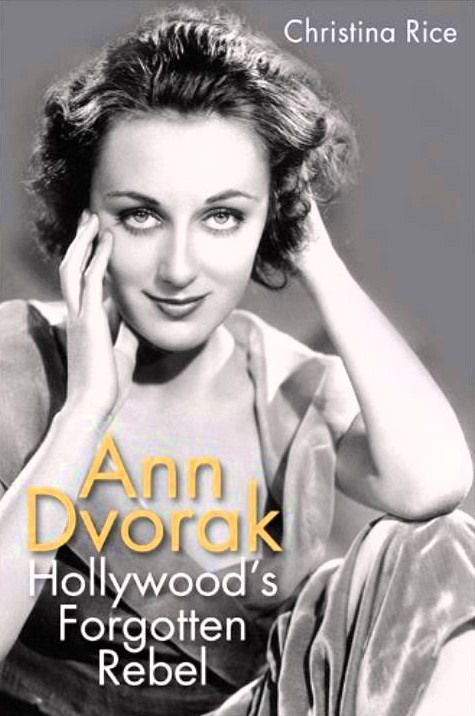 Ann Dvorak's first major acting role seared through the screen in Scarface (1932), marking an overwhelmingly masculine genre with an unforgettable feminine power. An inexplicable discontent portrayed in Three on a Match (1932) gave her self-destructive character a deeper poignancy. When real life rebellion against the studio system was frustrated, the B films that came her way, such as Blind Alley (1939) and Girls of the Road (1940), came to life with her unexpectedly fresh portrayals of intelligent women in distress.


The actress, recalled most often recalled for her early talkies, had an unusual beauty and talent that still seems modern and compelling when viewed today. A captivated Christina Rice, who first began her research into the actress in the nineties, has written an account of this spirited woman's life that encompasses her silent era roots, the studio era, and the lasting impression that this woman continued to make on audiences only familiar with her from her later, smaller roles in such films as The Private Affairs of Bel Ami, A Life of Her Own and Our Very Own. The very well-written book is handsomely illustrated with rare images of the subject throughout her life on and off screen.

"Rice’s articulate and compelling writing sets the story straight about an almost Hollywood icon’s story that needs to be, yet hasn’t yet been, told to the world. There is an immense responsibility that a biographical author has to their subject. Cinephiles like Rice, in particular, inherently know and respect it." - Tony Pinizzotto, EdgeoftheNet.com

Please join us next Sunday, 11/17 and Monday, 11/18 at The Silver Screen Oasis. All are welcome and registered members can post their own questions about this fascinating actress.