Fredric March was a leading figure on stage and screen for half a century, yet only recently has author Charles Tranberg produced the kind of biography that this actor deserved. On Sat., Nov 23 and Sun. Nov. 24, The Silver Screen Oasis will have the pleasure of discussing his book, Fredric March: A Consummate Actor (BearManor) with the author. 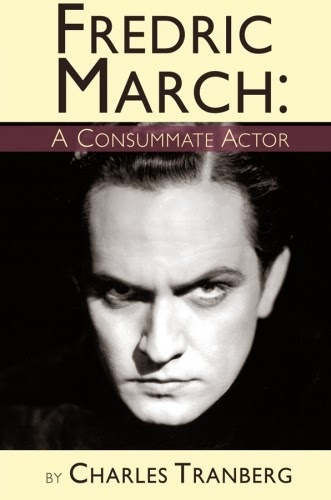 Remarkably versatile, and able to play both drama and comedy with style and skill, March was a leading man whose career began on film at the end of the silent era with The Dummy in 1929 and ended with his appearance in The Iceman Cometh in 1973. In between those appearances, March's best remembered films include Dr. Jekyll and Mr. Hyde, Death Takes a Holiday, Design For Living, Les Miserables, A Star is Born, Nothing Sacred, One Foot in Heaven, The Adventures of Mark Twain, The Best Years of Our Lives, Death of a Salesman and Inherit the Wind. Along the way he was nominated five times for an Academy Award and won the coveted statuette twice. On stage, he earned two Tony Awards, for his work in The Skin of Our Teeth and for the role of his lifetime in Eugene O'Neill's Long Day’s Journey Into Night—winning two Tony Awards and earning another nomination for his role in Gideon.

Despite a working schedule that never seemed to ease, March also found time to be an active American citizen, eventually facing criticism from those who felt that his early work against Fascism was ill-advised and later he and his wife Florence Eldridge fought against unfounded accusations in Red Channels during the HUAC years. A remarkably full life, and an intriguing individual whose own personality seems to have eluded detection thanks to his many varied roles.

Charles Tranberg's six well-researched previous books spotlighted little-known corners of entertainment figures' lives in I Love the Illusion: The Life and Career of Agnes Moorehead, Not so Dumb: The Life and Career of Marie Wilson, Fred MacMurray: A Biography, The Thin Man Films: Murder over Cocktails, Robert Taylor: A Biography and Walt Disney and Recollections of the Disney Studios 1955-1980. I had the pleasure of interviewing this author previously here about Fred MacMurray and here about Agnes Moorehead.

For those of us who feel we "know" Fredric March and especially those who have only recently discovered this actor, please accept this invitation to join us to discuss this gifted actor with the author here on 11/23 and 11/24.

After all, as Fredric March once said,

Below are links to websites related to the life and career of Fredric March:

I just read the MacMurray interview and really enjoyed it. We should have a good weekend as I've already learned more about March than I knew just by your introduction.

I think it's terrific that Mr. Tranberg has already been involved in some of the discussions here. We don't get that very often.
Chris

I'm glad you enjoyed it. The book about Fred was wonderful too. BTW, Charles has said he would be willing to answer questions about his other books too during his visit. I am delighted that he is going to be with us starting tomorrow!
Avatar: Frank McHugh (1898-1981)

I want to reiterate Chris' comments in that I feel we are very lucky for Mr. Tranberg's contributions. It's a lovely visit we are having with him on and off of the Guest Star thread.