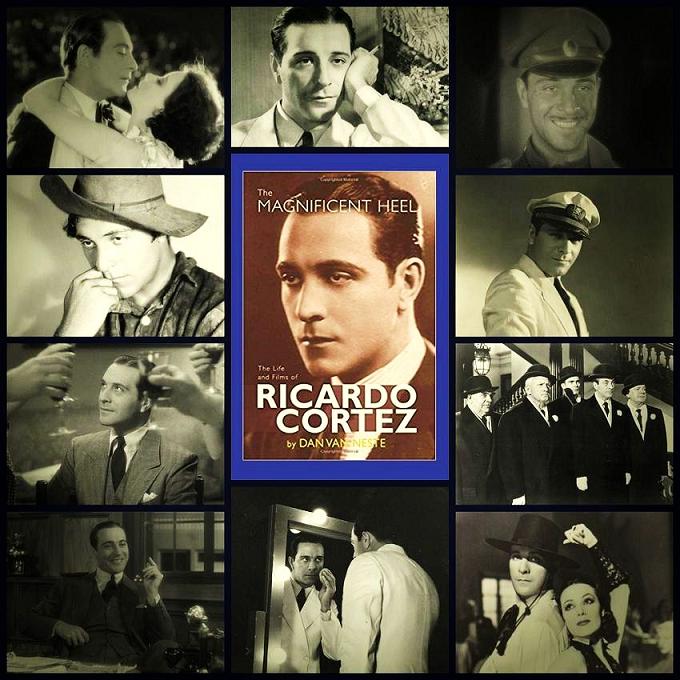 The Silver Screen Oasis is pleased to announce an online visit by Dan Van Neste on August 26th & 27th to discuss his latest book, THE MAGNIFICENT HEEL: THE LIFE & FILMS OF RICARDO CORTEZ.

Well-researched and revelatory, that author has brought a very private individual and versatile actor out of the shadows. Van Neste's portrait of Ricardo Cortez has been greeted with appreciative reviews such as one noting that this "is a book based on many years of dedicated research in which Van Neste contacted not only the last surviving relative of the actor but also diligently explored newspaper and entertainment archives to provide as comprehensive a picture of this neglected actor."

"His Face Is His Misfortune" wailed a headline in a 1929 copy of Picture-Play magazine about the darkly handsome Ricardo Cortez. "A second-rate Valentino" was one of the labels pasted on the actor and "a magnificent heel" was the take of one perceptive reviewer in 1934, when Cortez began the phase of his career as an elegant heavy. Washed up, limited, and stereotyped as he was so often told during his bits, supporting roles and leading man periods of his career from Silents to the Sixties, Jacob Krantz aka Ricardo Cortez proved himself repeatedly to be more versatile and highly capable of negotiating the changing demands of a career in Hollywood. First chosen as one of a squad of actors with Mediterranean names in competition with Valentino, (his screen name was chosen by Jesse Lasky & his secretary), and blooming into a dangerous character in the Pre-Code era, Cortez's career was remarkable for its longevity and for his relative obscurity today..

In his new book, "The Magnificent Heel: The Life and Films of Ricardo Cortez" (BearManor Media), author Dan Van Neste weaves the story of this individual into a highly enjoyable read that limns a life and a period we may never see again. Remarkably, the author does this at a time when almost all who knew Cortez are gone, but his impeccable research and keen eye for a telling anecdote brings the life and times of a relatively forgotten professional actor into high relief.

The rich tale of Cortez harks back to a time when he co-starred with Garbo, Stanwyck, Mary Astor, Kay Francis, and Irene Dunne, among many others. His directors included such masters as D.W. Griffith, Frank Capra, Gregory La Cava, and John Ford, all of whom were generally acknowledged as astute individuals when casting their films. Dan's latest book has been described by Film International as "a significant achievement. . . " and a book that fills "a void in film history" by Silents Are Golden.

Dan Van Neste, the author of over 50 articles related to film history featuring figures from Aline MacMahon to Zachary Scott, published in the pages of Classic Images and Films of the Golden Age. He is also the author of The Whistler: Stepping Into the Shadows, a comprehensive account of the noir series, that features Dan's extensive accounts of each film in the series as well as biographies of the filmmakers.

Please accept this as your invitation to join us in this online event on August 26th & 27th at The Silver Screen Oasis where you can ask the author questions directly (simple registration is all that is required to post a query or comment).

The links below will lead you to the site, as well as to Dan Van Neste's website and places to purchase his books:

A Review of The Magnificent Heel: The Life and Films of Ricardo Cortez:

Where to Purchase The Magnificent Heel: The Life and Films of Ricardo Cortez:? See below: