Well, when it comes to career decisions let's backtrack to George Raft turning down HIGH SIERRA (because he didn't want to play yet another hood who both loses the girl and dies at the end) to virtually beg for the role of gangster/nightclub owner Steve Larwitt in THE HOUSE ACROSS THE BAY . . . whose character does just that.

Man, wish I could understand an actor's psychology.
Top

The Lone Ranger is a super hero. Look at that costume. Most western adventurers wear real clothes. This guy's practically in tights!
Top

RedRiver wrote:The Lone Ranger is a super hero. Look at that costume. Most western adventurers wear real clothes. This guy's practically in tights!


I loved it ... With the Mask, the White (Silver) Horse, Colorful Red Scarf, and Light Blue Outfit ... makes him a bona fide Western Super Hero with a style/flair of it's own! 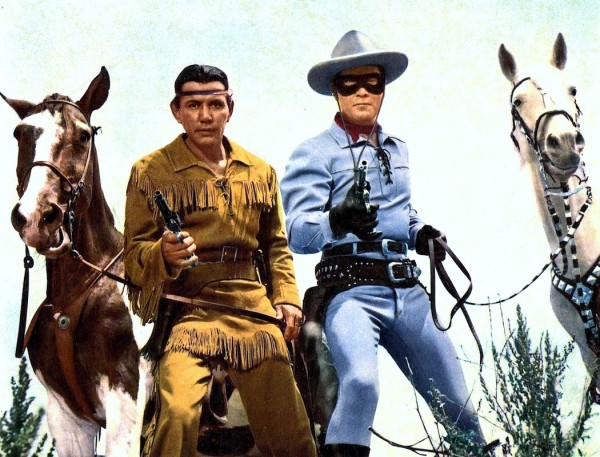 "Indians! We're in trouble, Tonto."
"What you mean WE, paleface?"
Top

.
Of course I haven't seen the new Lone Ranger, but I seriously doubt that I ever will unless when it comes to TV there is a day when there is absolutely nothing else on to interest me. However, I have seen a couple of trailers, and a few still photos, and that crow is abominable. I've said before that only two or three remakes have been anywhere near equal to the originals, but this looks like it will be ridiculous to me at least. I think a big part of the dislike for it is that until he died (which was fairly recently), Clayton Moore kept the image of the Lone Ranger up in our minds. I thought it was disgraceful when the studio or whoever it was insisted he stop wearing the mask, but I realize now it was probably in preparation for this new version.

When oh when is Hollywood going to wake up and smell the roses and leave well enough alone. Remakes, at least today's, are not the same as the remakes that were done in the forties and fifties of silents, and very early movies. Those remakes enhanced the STORY, today remakes try to change the story, and unfortunately, very few of today's actors are of the same acting (talent) calibre as those original actors.
.

mrsl wrote:I thought it was disgraceful when the studio or whoever it was insisted he stop wearing the mask, but I realize now it was probably in preparation for this new version.

While I agree it was disgraceful, they made him stop in the 80s when they last attempted a remake of the Lone Ranger, which was also abysmal. To it's credit, it didn't mock the concept of the character entirely as this new abomination has done.
Top

I'm glad that Jack Wrather was decent enough to return the right to wear the mask to Clayton Moore before Mr. Wrather passed away. What a lot of senseless legal wrangling and fan uproar. But just as in (the REAL) Lone Ranger shows and 2 original movies, justice prevailed

After watching the TV show as a very young child, it disappeared for a while, at least from my world. When I was about ten, the show returned, to an after school time slot. I was thrilled! We're only talking about an absence of three or four years. But to a kid, that's a lifetime!
Top

You're right, RR; it was a great show for little kids (and even us big ones nowadays)! It amazes me that the first season was made up of 52 episodes--we'll never see anything like that again, will we?
"Always drink upstream from the herd"
Avatar: Clayton Moore putting on a mask--this time for "The Ghost of Zorro"
[i]WOW/Susan[/i]
Top

Most US TV big 4 network shows are still around 22-26 episodes per season. I actually prefer the shorter format for shows like Dexter, Sherlock, and Burn Notice, to cherry pick a few I enjoy. It lets the creators tell their best stories without any filler or losing all sense of direction (like Lost).

That aside, and back on topic: as a kid Lone Ranger was my number one favorite live action adventure show, just ahead of Batman (Adam West)! I couldn't get enough of it. Had my own mask, cowboy hat, and six shooter toy. I didn't know they were reruns and was upset when they didn't use the "real" Lone Ranger when they made the 80s movie (he was in his 60s then I think).

JackFavell wrote:We're lucky now to get 6 episodes in a season. I was shocked the last time I was on Netflix at how the older shows (and they're not THAT old) cranked out 26 episodes in a season! Can you imagine 52? They must have been working their butts off every day, all day, all year!

52 does seem unbelievable by today's standards, you're right. In Clayton Moore's autobiography he talks about the fact that they shot a minimum of 12 pages of script a day--sometimes 18. By comparison, for TLR 1st movie, they shot only 4 or 5 a day. So they were workin' their fannies off on that show!

Good thing they loved what they did. What a legacy of good, clean entertainment they left us, as Anne said earlier. The 1st show aired 9/13/49--1 day before Clayton Moore's 35th birthday and here we are, 64 years later--still enjoying it